As you know, neighbour Krista is a bird lover. So much so, that she named her daughter Wren. So months ago, when I saw the pattern to knit a little Wren, I knew I had to do it for her. I thought it would make a cute little Christmas ornament. 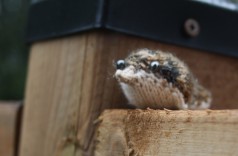 It took less than an hour to knit, and very little time to sew up. That said, I’m not overly thrilled with it. Mine isn’t shaped quite like the pattern, his tail doesn’t tip up, and he looks more like a little beady-eyed submarine. I think it has something to do with how I sewed him up. I may take out the seams and try again. I’m also not thrilled with his eyes. I used some hematite beads, because I though they had a nice bit of shine. I think I may take them off an embroider instead – these ones stick out too much.

Not every knit can be perfect…. and there’s still time to fix before Christmas!