Back in November, I mentioned there were two new babies coming into my circle. First is the impending girl to my coworker. Second is a little boy to my cousin. I had intended to make a quilt for both, but I probably should have started my cousin’s first… because her baby shower is only a week away.

Bad planning on my part (though I do have a knit blankie already made I can gift), but I think I can make up for it with something even more special. 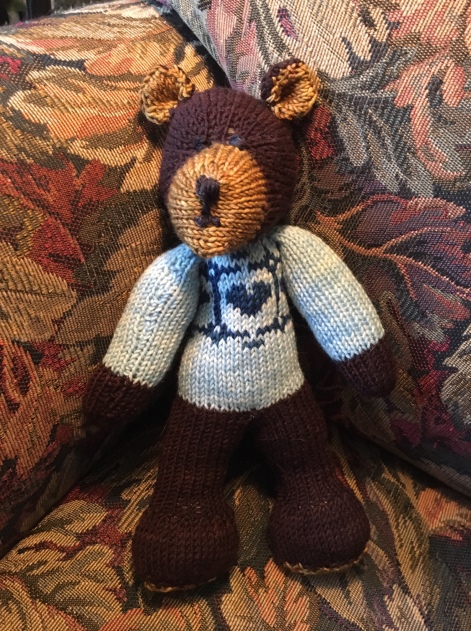 The pattern is Bear Essentials, and its from the January 1994 edition of Canadian Living. Honestly, it’s not my favourite stuffed bear pattern… it’s tricky to seam and assemble, and I’ve knit nicer, easier stuffies… but this one is special.

When I was a teen, we lived three streets over from my aunt and her two girls, (the oldest of which is having the baby). I used to walk them to school and babysit, and as a result we were quite close. And of course, Mom made them many knit things  – including these bears – which for some reason, they called Bearby, and carried everywhere.

So it seemed only natural that my cousin’s baby should have a Bearby of his own. He’s knit entirely from leftovers of Stray Cat, and while I wasn’t thrilled with the construction, I’ve got to admit, he’s pretty soft and cute!