Wyoming Breezes asked me to do a post about my sewing machine, which she glimpsed in my L&E post the other day.

It is not a Featherweight, as she suspected, but a Singer 201K.

It was made in 1949 in Scotland… and it was Dave’s Grandmother’s machine.

How it ended up in my hands is a bit of a story. Last year, or the year before, Mom some how got involved in a vintage sewing machine forum. She had her Grandmother’s Singer treadle machine, though it wasn’t in good shape. After being on the forums for a while, she decided she wanted to get her hands on a Featherweight, because she was thinking of taking some sewing classes, and the Featherweights are much more portable than her modern Husqvarna. Soon enough she found one, and the next thing you know, friends, neighbours, coworkers and others, are all turning up with “old” Singer machines they had kicking around their house and didn’t want. Next thing you know, Mom is a full-on collector, collecting almost every model Singer put out between the late 1800s and 1960. She learned how to tune and fix them, and in the case of the machines in tables/desks/cabinets, she started contracting out the wood refinishing to Dave.

And suddenly Dave said “I’m sure there is a Featherweight kicking around Grandma’s house.” As you may know, some of the Featherweights can be worth a pretty penny, so we went on the hunt for it. We never did find it, but the 201K turned up in the garage. The desk was in terrible shape. For the last 40 years it had been used as a work bench/craft table by various members of the family.

The machine itself was in need of a lot of love mechanically, though the paint and decals just needed a good cleaning. Between Mom and Dave, they had it restored in a matter of weeks. 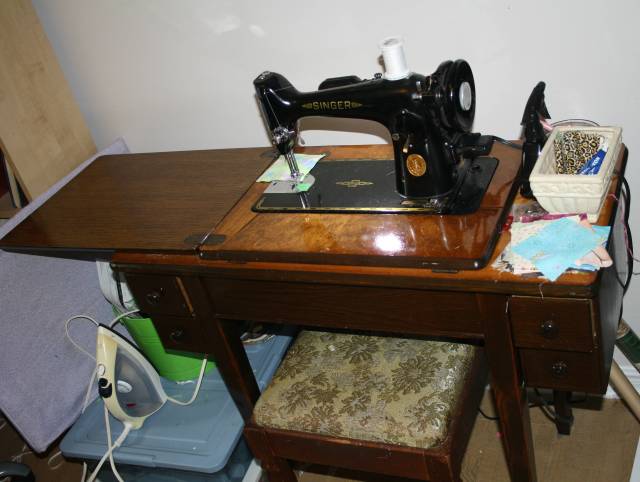 It was supposed to stay with Mom (she didn’t have a 201 in her collection yet), but given the history, she decided it should live with us. And here’s it’s been ever since. I use it almost daily. Dave’s grandma (who turned 90 last month) was thrilled to know it’s been given a new life. I made her Christmas present (place mats) on it and she was just tickled by that.

It’s not 100% original. Mom put a modern, LED light on it and had to replace a few other pieces. Almost all the bobbins were rusty, so I have all new bobbins for it. It also came with plain striped face plate, but Mom surprised me with this beautiful Celtic one at Christmas. 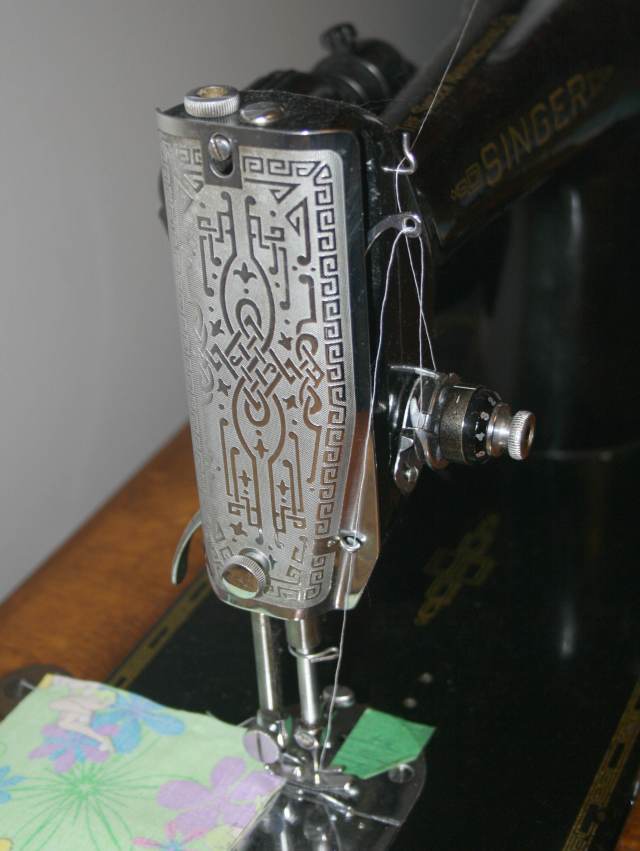 Despite it’s decoration, it’s not a fancy machine. It only does straight stitch, though it does have reverse. (I have a modern 1993 Singer if I need to do anything this one can’t do.) I’ve been able to get some fancy feet for it, including an even-feed foot, and a free-motion foot, both for quilting. This model has the ability to drop the feed dogs, so I can free motion on it (they call it the “darning” feature in the original instructions – which were still in the drawer!) 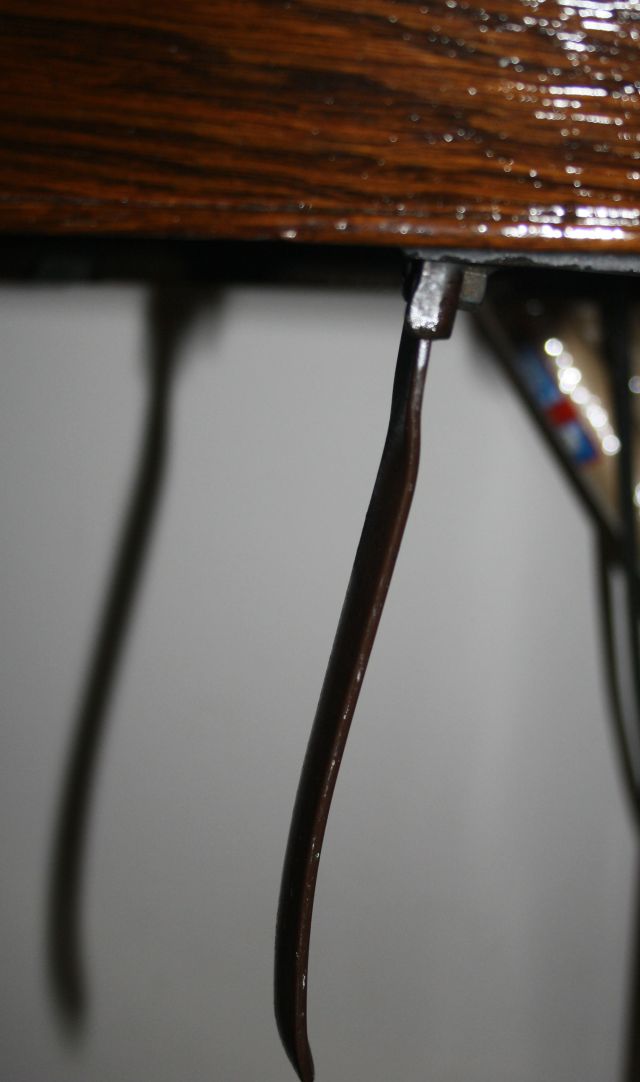 The feature I really love is the knee-lever. While it does have a foot pedal, it also has the knee-lever, which allows you to power it by pushing your leg against the lever. I find it’s much more comfortable than the foot pedal, and easier to control speed.

And as for Mom and her Featherweight that started it all…

well, it found a few other Featherweight friends, as well as other models. She now has 15 vintage machines in total – all working (and she sews on them all). She has treadles, and hand cranks, as well as electric machines. She has machines in large desks, small cabinets, and wooden carrying cases. She did give one Featherweight to Paisley, and a 99K  in a small desk to Rowan.  I guess we’re all just Vintage Singer girls!