First, I’m happy to have prompted so many happy Barbie/Midge memories with yesterday’s post. I’m a huge Barbie fan, though my era was the ’80s/early ’90s. (I still have ALL my Barbie stuff). You’ll definitely be seeing more of vintage Midge and her seasonal outfits.

But moving on… it’s a week of FOs here at Chez Wandering Cat. Today, I give you Nera…

As you know, I knit it in just six days. But as I mentioned, part of the speed was the yarn. Chunky on 6mm knits up so quick! The yarn is Knitpicks Chroma Twist Bulky… and despite not being the colour I expected, it knit up beautifully. It’s a superwash wool, so there is some itch, but it is bearable. 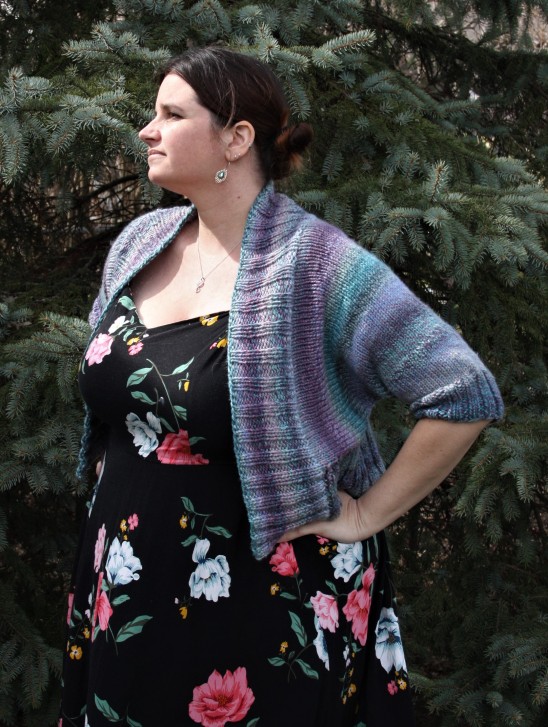 I made a few minor mods to the pattern. It’s knit from cuff to centre back, and the instructions have you knit the whole thing flat. But I saved myself some seaming by working the sleeve in the round, and only knittin flat when I got to the underarm.

The pattern also has you join the centre backs with a three-needle bind off. I grafted instead. With the gradient yarn, you can’t tell where the seam is at all – it just looks like one solid piece.

It’s a fantastic little throw-on cardigan, perfect for this time of year. Sadly, it the colour really only works with one of my dresses… hmmm I guess I’ll have to buy a few more… 🙂