I know I’ve told you that Dave teaches music (guitar, bass, ukele, banjo, piano, drums…), but I don’t know if I’ve ever told you that he also repairs things related to music (instruments, amps, stereos…)

He especially loves anything that involves fiddling with tubes (ie, old technology). Well, way back in mid-October, he came home with this…

And RCA Victor model 88K. A coworker at his school got it with the intention of restoring it, and soon realized he was in over his head. He asked Dave if he’d like it. And of course, Dave said yes. From what we can tell, it was made between 1937 and 1940 in Montreal.

As you can see, it was in pretty rough shape. But Dave soon had it’s guts out and it’s body stripped down. 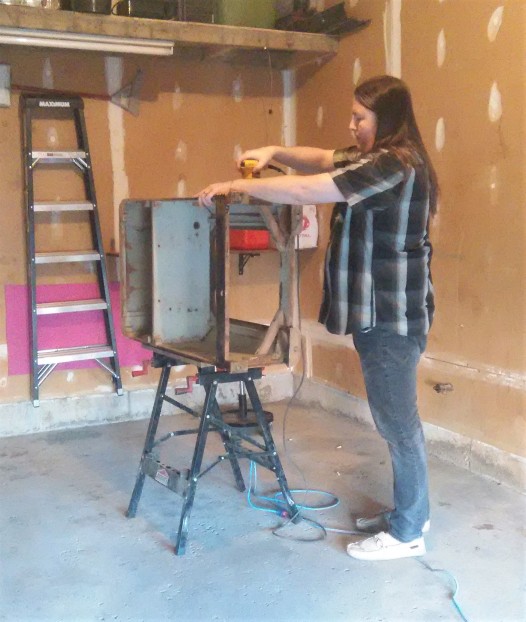 I bought him stain and clear coat, and we got some new speaker cover fabric at Lens so he could bring it back to its original beauty.  He kept it original as possible (we were even able to get new water slide decals to replace the old ones), but made a few minor modifications. He did something with the wiring so it will play stereo instead of mono, and he added an input jack so I can use it to play music from my discman or phone. We talked about changing the stereo so it was both AM and FM, but my discman has a radio in it, so we decided to keep the stereo part original.

The day after new years, it was finally ready to go. I cleaned out the corner by my couch, and moved my side table*, and she got put in her new home.

Isn’t she gorgeous. He said I’m not allowed to put any plants on her, but I did manage to sneak my air plants up there (in the gravy boat). The silver speaker is one of the rears for our TV surround, and it will get a new home eventually. The only thing it needs now is a little Nipper dog… and he’s been ordered!

What a difference! That guy of mine has some serious talent. I may just keep him!

*I’m happy to report, that in cleaning out the corner, I  FINALLY found the missing ball of Twinkle Cat from my gloves. It was inside one of the shelves at the very back. Once the poncho is off the needles, I’ll make my cowl!