It was a holiday Monday, so I took the opportunity to sneak up to Mom’s and quilt Moon Dance and get it off the to do list!

And I am VERY happy with this one. It’s a nice size – about 64 x 78″; so great for a snuggle on the couch, but also big enough to throw on the bed for an extra bit of warmth on those cold snowy nights. Jenn and my brother live three hours north of us, so they get a lot more of those than we do. (In fact, all the snow you see there has melted … again!)

The pattern is  Quatrefoil and it’s one of my  favourite kinds… simple but looks complicated! My only tip for making this one is to make all your little four patches first. It makes assembling the blocks much more efficient. It’s definitely a pattern I will make again.

Sadly, the darker fabrics in this are not photographing well. Though you can’t see it in the above picutres, there’s a fair amount of purple in the quilt, which is why I used the fabric I did for the sashing.

I had to really mess with the exposure to give you even a hint in the top left and bottom right blocks. This is definitely one that looks much nicer in person. 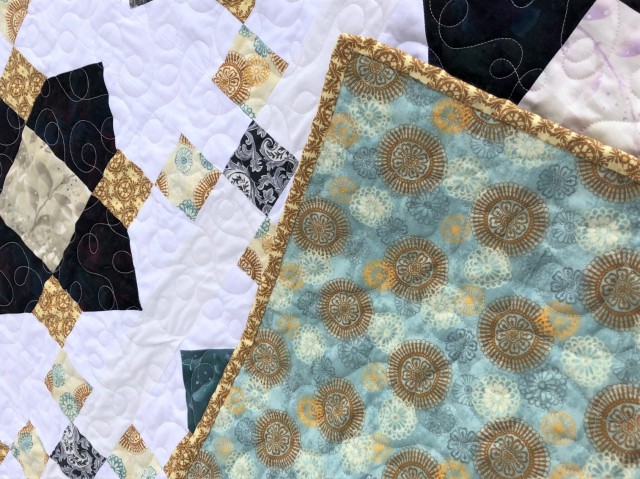 I had just enough of this fabulous duck egg blue fabric for the backing. I was really keen on being able to use it because it coordinated with one ofthe fabrics I used in the four patches. The other four patch fabric (which was left over from the back of Honey Patch) was used for the binding as well, wrapping everything up with a nice, neat bow!

Now this one is tucked away from furry fiends until March when it will be gifted to the birthday girl!