I think the lockdown is finally getting to me. I’m having a really hard time committing to not spending. Which is especially bad, as my pay has just been cut by 10% (At least I still have a job, but it’s a big hit).

It started because I didn’t have the right needles size for the East Hale cardigan. I popped on the Yarn Canada site, because I know they carry the brand I like, and it’s Canadian – our dollar is crap right now so ordering from the U.S. doesn’t make sense.

Anyway, you need to spend $65 to get free shipping, so I thought I’d order some sock yarn for present socks. We got rid of our tools to make self-striping yarn easily. There’s a particular pair of socks I wanted to make for Miss Paisley, so I got a ball of fun, self-striping opal, and some solid black (I could have dyed that, but I wanted to get up to the $65 limit). I also decided to try a skein of this Cascade Heritage Wave

It’s a two-tone yard with a subtle shade shift. I thought it would make nice cable socks for someone on my list.

That was all great until Yarn Canada emailed me a few days later to tell me the self-striping I’d picked out had sold out. There was nothing else on their site that said “Paisley” to me, so I told them just to refund the cost and send the rest of the order on.

In the mean time… I headed on over to the Knit Picks site. Felici  stripers were on sale… and well…

The bottom right colour (Summer Camp) will be for Paisley. Top left (Side Pony), will probably end up as socks for her sister. The top right (Thunderstruck) are for my brother, and bottom left (Hamburger) for my Sister-in-Law.

Of course, Knit Picks has a $75 minimum for free shipping…

So some Stroll Tweed came along for the ride. The grey will probably be for Dave’s birthday socks (July). And the Lavender…

They are already being worked up into another pair of Woodland Walk socks for the gifting box.

Now my poor bank account is smoking. But at least they all have a purpose! 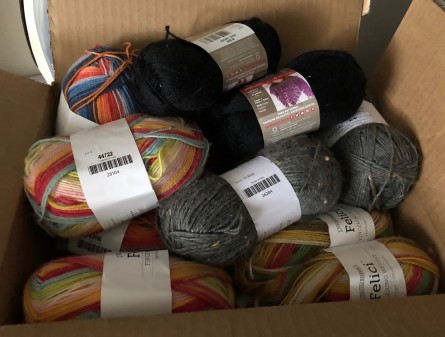 They are just too soft, and warm, and inviting for some to resist….